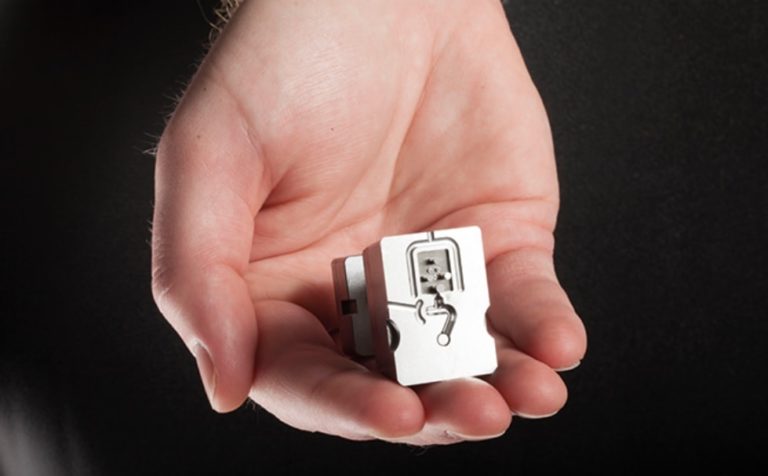 The Big Trend For Small Devices is Drug Delivery

One day in the late 1980s, Donna Bibber looked over the shoulder of a “mad scientist” colleague at Corning Life Sciences – he was working on lab-on-a-chip technology, and Bibber realized that it could be a game-changer. She is now Vice President of Isometric Micro Molding, which addresses the growing market need for expertise in device miniaturization. Isometric specializes in making and assembling tiny components, primarily for medical device companies. Some of the work is quite experimental – only around one approach in ten gets taken to the next level – and, as Bibber puts it, they have to “kiss a lot of frogs.”

Bibber divulges the current trends and challenges in the world of the production of micro-scale drug delivery devices in a Q&A.

What key changes and trends have you noted over your career?

Miniaturization is a very evident trend. During my 30 years in the industry, components have been getting progressively smaller and being made to ever-tighter tolerances. At Isometric Micro Molding, a recent contract involved the manufacture of plastic parts with a tolerance of single microns – which is crazy for injection-molded parts. We were able to execute the contract successfully because we had the necessary tooling – tooling is the true enabler for micro-device projects. You can’t make highly miniaturized parts to 20 percent of permitted tolerance – regardless of absolute tolerance – without a robust injection mold.
As for application trends, I’ve observed a growing interest in intraocular implants. One reason for this is an aging population, but another is increasing recognition that the eye may be an avenue to treat the brain, as well as other parts of the body. Hence, many companies are examining the potential of ocular drug delivery for the treatment of neurological problems, such as Alzheimer’s and Parkinson’s, but drug delivery devices that are placed or implanted into the eye need to be as small as possible…

Is the miniaturization trend driven by cost or function?

It’s a bit of both! For some materials, such as bioresorbable polymers, the driver is cost because those materials are very expensive – around $3,000 to $22,000 per pound. Similarly, polyether ether ketone (PEEK), which is broadly used in medical devices due to its strength, heat resistance, and biocompatibility, is $400 to $600 per pound. These prices compare with dollars per pound for most plastics. In medical device manufacture, materials must be 100 percent virgin – you can’t recycle the sprue, so it just gets thrown away.
For other devices, miniaturization is all about function. Drug delivery devices need to access tiny anatomical spaces in delicate tissues, often via a needle or a catheter. They must be flexible enough to travel through a narrow tube, but after implantation, they must be strong enough to maintain function in a biological system. The polymer selection and physical properties are both critical in these cases.

How do you develop robust manufacturing processes for microscale devices?

Essentially, it’s an experimental design. You have a part with a particular specification, and you must identify the process variables that may affect how close you get to that specification. To find out which variable has the most impact, you vary each in turn during injection molding, and then compare the end-product with the specification. That enables you to tweak the process to ensure you consistently make parts within tolerance limits.

The key to this method is metrology – the measurement system. Comparing the physical dimensions of dust-speck-sized components is difficult. Most companies have metrology methods that compare a bunch of numbers on a page, which is non-intuitive and can require weeks of discussions between the manufacturer and the client. We do it differently; we use a CT scanner (which costs about three-quarters of a million, so not a common asset) that generates 3D scans of each part, giving us an outline representation of the component, similar to a CAD model, called a point cloud. We overlay the point cloud on the original CAD model to compare the part we actually made to what we intended to make. It’s very fast and very visual. The software gives us a color-coded deviation plot (purple for above tolerance and red for below tolerance) so we can see exactly where and how the part deviates from the intended dimensions. Then we simply adjust the process accordingly.

Thirty years ago, I would have been delighted if we achieved a tolerance of plus or minus 20 microns, but today we are making components with three-micron features. This is very important because medical devices address critical applications, and the smallest part in an assembly is usually the bit that actually enables the device, so it’s vital to get it right.

Another challenge to contend with during the manufacture of highly miniaturized parts is the effect of static. Once, when we were making some particularly small components – five hundred of them in a single pellet, each component being the size of a grain of salt – we had collected them in a plastic test tube. Inside this tube, the micro-components were dancing around, due to static. When the gentleman who was collecting them bent over the tube, the whole batch – hundreds of components – shot out of the tube and onto his head! Our entire day’s production disappeared into his hair! We can laugh now, but at the time it wasn’t funny at all. But it did help us to appreciate the importance of static electricity in micro-manufacturing. Our entire set-up is now a static-free environment with deionized air, grounding straps, and grounding rods. We even put in rubberized flooring with electrostatic properties, and the cleanroom walls are covered with electrostatic paint. We learned our lesson well!

What are the challenges associated with manufacturing drug device combinations?

The main challenge relates to tolerances. Imagine you are delivering a drug through a tube; it is amazing how quickly the tolerances over the length of the tube stack up to cause significant dosing error, even if they are only plus or minus five microns. It’s the same with valves. Valves the size of dust specks may have apertures of 20 microns, and you must meet the tolerance for these to enable accurate function. The tools can take up, say, 20 percent of the permitted tolerance, the press can use up another 20 percent, the measuring process can take up another percentage, and so on.

What exciting early stage technologies are you seeing?

There are so many, but if I had to pick, I’d say that the two fields of most interest are novel materials and 3D printing. Novel materials may permit all kinds of new functionality; however, if there is no predicate device for the new material then any device based on it may have to follow a more rigorous regulatory pathway (but that’s another subject). 3D printing is also exciting but isn’t yet at the stage where it can make parts to micron-scale tolerances, and there still aren’t many materials that are compatible with 3D printers. Nevertheless, I expect it to develop into a major enabling technology; it’s already being used, albeit to make the molds rather than the parts themselves. If you combine new materials with 3D printing, it will also open up the field of biomimicry, such as the construction of artificial organs.

Learn more about the micro expertise of Isometric Micro Molding HERE. Ready to start your micro project? Contact us today!

Powerful micro capabilites that bring your project to life.
Connect with our expert team of plastics engineers today!

Our Keys To Success

IMM Fastest Growing Micromolder in US

What are the Biggest Micro Molding Challenges?